These are some of the women who played an important — yet almost forgotten — role in many soldiers’ lives during the First World War. 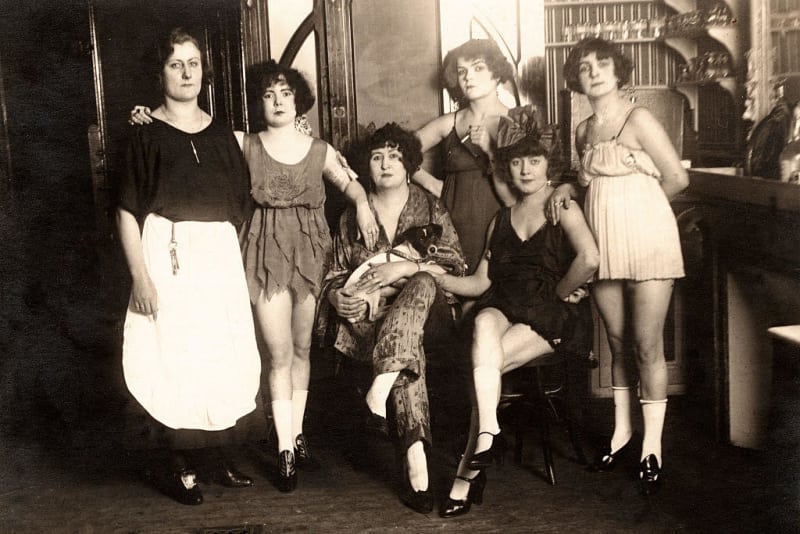 They worked in brothels frequented by troops serving on the front line in northern France, but their role has been virtually erased from the history books.

Thanks to a new Roundhouse art project, Cause and Effect, to mark the centenary of the end of the conflict, the wartime sex workers have been immortalised in a film with poet Hollie McNish.

McNish worked with historian Clare Makepeace from Birkbeck, University of London, to create War’s Whores, which details the “significant minority” of men paying for sex on the front line.

According to Makepeace’s research, one in five of all hospital admissions in 1916 of British and dominion troops in France and Belgium were for a sexually transmitted infection.

When America joined the war in 1917, sexually transmitted infection rates soared above 190 cases per 1,000 American men at the French base ports, after soldiers in France invited their new ally to join them in the brothels.

The French had a whole network of legalised brothels, known as maisons tolérées, dotted across towns in the northern part of the country. They housed professional sex workers, who were subject to regular medical inspections.

Makepeace estimates that thousands of women worked as sex workers during the war, either professionally in the legalised brothels, or as amateur prostitutes, plying their trade in streets, hotels, cafés and bars in exchange for either money or gifts in kind.

“It’s an aspect of life in the First World War that most people don’t really think about, even though it was fairly predominant,” Makepeace told BuzzFeed News. “I would say a ‘significant minority’ of British soldiers engaged in extramarital sex.” 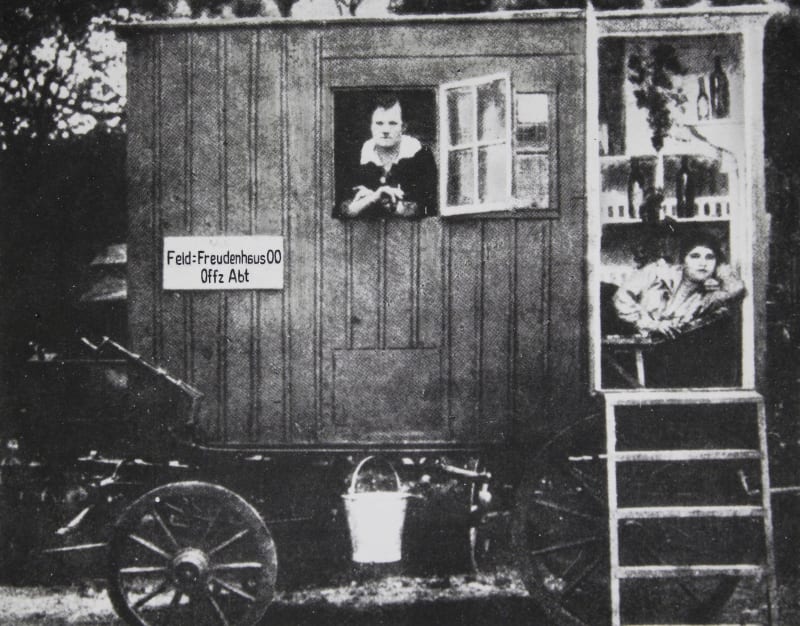 Not wanting to offend their allies, the British High Command insisted that brothels should be kept ‘in bounds’ for most of the war. Officers also visited the brothels, but they were kept separate – they went to Blue Lamps; the other men were serviced in Red Lamps.

The American forces took a different approach. The American Expeditionary Forces placed brothels out of bounds for soldiers and disinfection was compulsory within three hours of contact. If a man disregarded this procedure and subsequently developed venereal disease, he could be tried for neglect of duty.

However, French doctors who treated the American soldiers argued that American forces were contaminated with syphilis or gonorrhoea “in spite of the punishments and severe orders” that were in place.

“There were different ideas of masculinity in France and America,” Makepeace said, explaining why different rules applied to different soldiers. “In France it was about virile men, being sexually active, courage and sexual prowess linked together in notions of masculinity.

“In America, chastity didn’t mean these men were any less masculine; it was thought that overuse of sexual organs might exhaust them.”

Some men paid more to visit sex workers who might infect them with an STI. 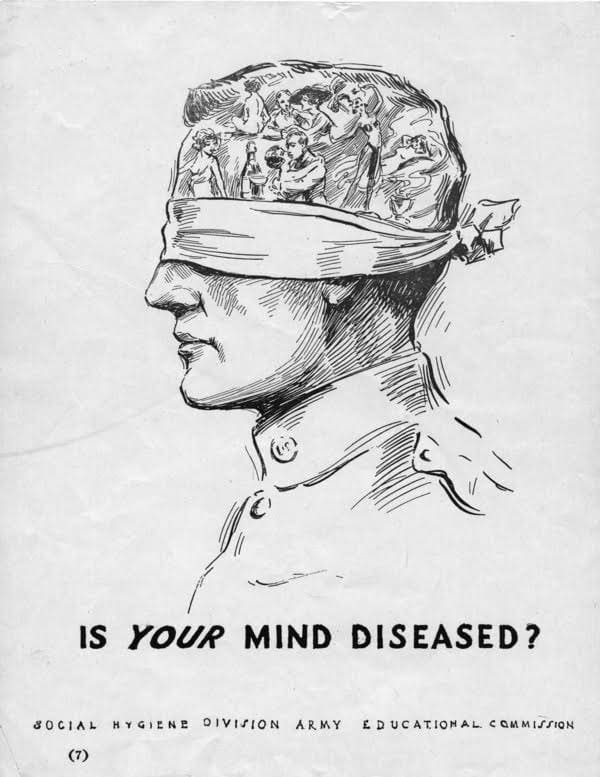 An infection of syphilis or gonorrhoea required a hospital stay of about 30 days for treatment, and so for many men this was an attractive option, rather than fighting. Syphilis was treated with injections of mercury, which usually did nothing to prevent the fatal progression of the disease years later.

Historians have said that American soldiers in the trenches who had managed to hide their gonorrheal infection would make money by transferring some of the pus — or gleet — on a matchstick from their urethra to another man’s, who also hoped to catch the infection.

Demand increased before a major battle — and many of the customers were virgins. 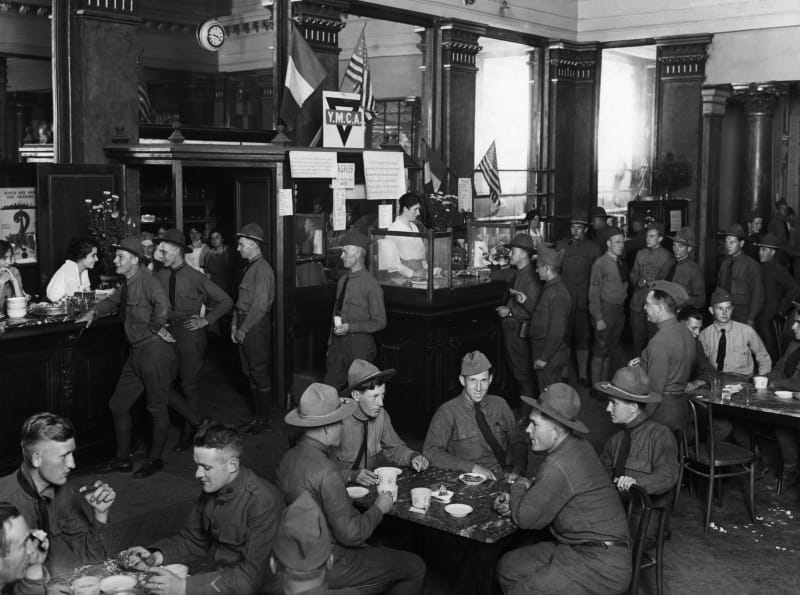 Interior of the casino in Aix-les-Bains, France, now used by the YMCA, showing the old bar in La Salle de Bacchus. YMCA girls are serving refreshments to the boys (circa 1918).

McNish told BuzzFeed News that one of the things that she found most poignant was the fact that so many men wanted to visit a sex worker if they thought they would die the next day.

“It is shocking the numbers of men looking to go into brothels before major battles,” she said. “It’s a much deeper thing than we give it credit for. The men thought they were likely to die the next day, the thought you’re never going to have someone touch you nicely again before you die, it must be horrendous.

“Before one of the major offensives, where 80% of men were expected to die, 300 men were lined up outside this one brothel.”

Many of the men, she said, were virgins, who wanted to experience having sex before they died.

“It didn’t cross my mind that so many men would have been virgins,” McNish said. “We don’t really talk about virgin boys, but we obsess over female virginity, purity. Men who had never experienced being with a woman wanted not to die before they knew what it was like.”

The wartime sex workers have been “shamed out of history”.

McNish told BuzzFeed News that it was likely that many of the women who sold sex work had “ended up in that situation” due to difficult circumstances, but that their stories are mostly unrecorded, and the history of the brothels is told through the voices of men. “Most of the accounts I read were still from the point of view of the men, soldiers, [brothel] accountants; most of the women were illiterate,” she said.

But, she said, she hopes that reigniting the memory of wartime sex workers will provoke conversations about the industry today. “The extent that women’s rights have moved on since the First World War, and sex workers’ rights haven’t changed that much,” she told BuzzFeed News. “They get lost in a lot of conversations. I hope I’ve highlighted it in a good way — not a glorifying way, just a highlighting way, a role of women in war that we’re not allowed to talk about.”

“It’s ridiculous,” McNish said, “that we’re allowed to talk about violence and not about sex. … I think it’s adults that stop young people from learning things, and I don’t think that’s helpful to anyone. That job has been shamed out of history, rather than just forgotten.”

“It’s also partly because there is no voice for them,” Makepeace added. “They’re not in the sources [you would look at] as a historian. No one’s written their memoir of the experience of prostitution during the war, for understandable reasons.” Many of the women would not have been able to read and write, she said, and many wouldn’t have wanted people to know that they were selling sex.

The accounts from soldiers and French government officials, however, suggest that prostitution was widespread.

Makepeace said that she thinks the women’s place in war has been erased as it doesn’t sit well with the accepted notion of war heroes. In some cases, Makepeace said, “the women were being treated quite badly,” and some of the men visiting the brothels will have had wives back home, which she said makes the idea even more difficult to accept.

“Their stories are uncomfortable with the narrative we have of soldiers in the First World War, that are still with us today,” she told BuzzFeed News. “Men who were heroic, fighting in defence of the nation, and that idea fits uncomfortably with the idea of what these men were doing.”